Culture and Music for Third Grade

The music teacher approached me in January and asked if I would like to collaborate on her music presentation, which would take place in March.  I am all up for working together so I jumped at the opportunity.

I loved her theme.  She was going to have her third grade classes “travel the world” and visit four different countries (because there are four third grade classes.  Each class would focus on one culture: Australia, China, Egypt, and Mexico.  My job would be to have each class make an art project related to their respective cultures and have these on display at the presentation.  I would turn the foyer into a gallery for the event.  The music teacher would teach all classes the songs from all the countries, but they would only be responsible for presenting their country’s songs for the presentation.

This was a great learning experience for me.  I wanted to find some sort of common thread between all cultures.  I was able to do this with three of them.  For Mexico, Egypt, and Australia, I was able to focus on various symbols used art.  I also learned tons along the way.

For Mexico, I focused on yarn paintings made by the Huichol tribe.  This artwork contains symbols such as the sun, moon, fire. lakes, etc.  I had never painted with yarn before.  I loved it.  I found it to be very meditative.  It was messy at times but overall, very satisfying.  It worked perfectly because I had saved a ton of yarn scraps from a weaving project third grade completing early in the year.  We practiced making the symbols and students got to “write” their story. 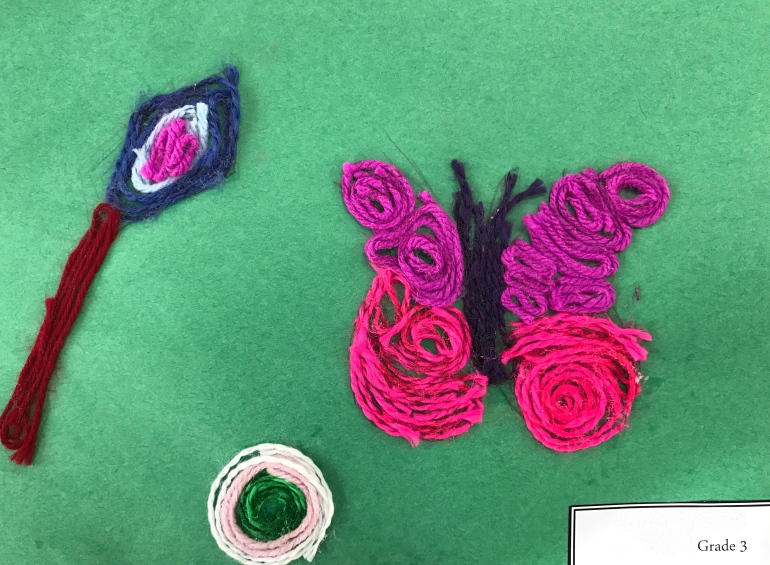 For Egypt, this task was a little tricky.  I didn’t find much pertaining to Egyptian art outside of Ancient Egypt.  Are all the good things in the past for this country?  Outside of pottery and necklaces, I really didn’t find very much, unless I wanted to do some major paper mache mummy or mask.  I didn’t want anything big, so I chose two small projects instead.

We did focus on the symbols used in hieroglyphics and we discussed ancient Egypt’s culture.  It is one of our neighboring countries and some of our students are from there. Most people have visited (at least before Arab Spring) so we were able to discuss the pyramids, the Nile, and many cultural nuances simply because of where we live.  Students made cartouches and necklaces.

Quick facts:  Did you know that cartouches are basically tags for the coffins?  Necklaces were super ornate but were never worn when the person was alive.  Necklaces were only worn by the body during burials.  Of course, this was only for people who could afford this luxury.

We made the cartouches using cardboard, glue, metallic paint, and shoe polish.  The necklaces are made out of paper plates and tons of small beads. 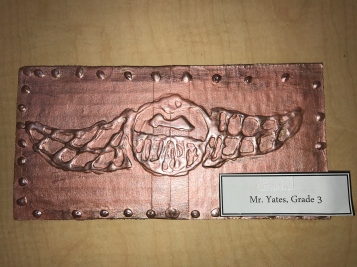 For Australia, I was able to focus on aboriginal artwork.  I learned that, though this is an art form has been around for a long time, it wasn’t until the 1970s that this work was produced on canvases.  The aboriginal tribes were advised by a professor in 1971 to start painting their work on canvas rather than in the sand.

Students got printouts of various symbols, and then they created their stories using tempera paint.  Of all the projects, I feel this one was the most time consuming and hardest.  Students had to paint dots to make their images and this gets pretty boring pretty fast.  The ones that look the best are the ones in which students didn’t give up (they lasted longer than I did). 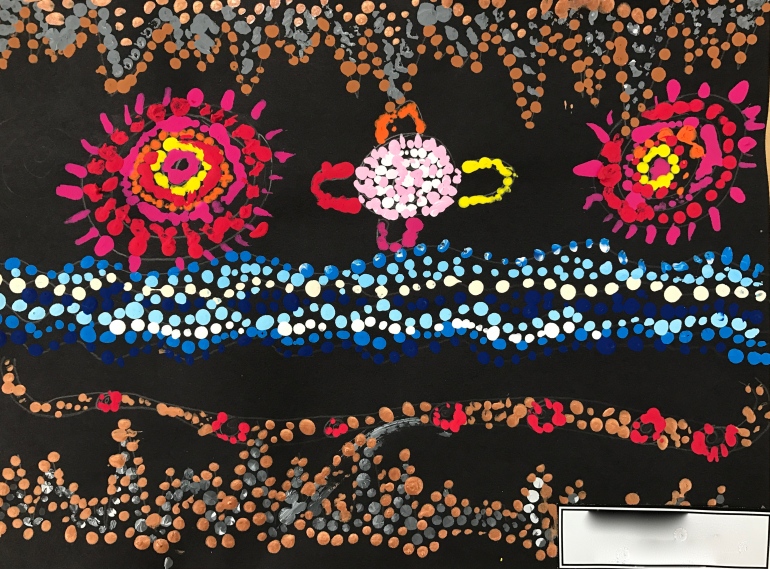 And, for China, I also did two projects.  I didn’t give the students any list of symbols because I couldn’t find any, but I did focus on something symbolic.  We did dragons and cherry blossoms.  Dragons for power and luck, and cherry blossoms for fertility (though I told the students it was for happiness).  Did not want to do anything sex-ed related.

All in all, it really worked out for the students, and the presentation. There was a wide variety of projects to display and they were we all learned a lot in the process.

This site uses Akismet to reduce spam. Learn how your comment data is processed.

I am an art teacher, living in the Middle East, following my passion for art, teaching little children about the finer things in life, and loving every bit of it.